The results of the iReBa workshop are presented by the iReBa student group to a big audience of representatives of UBB, the municipality, cooperation partners and students. 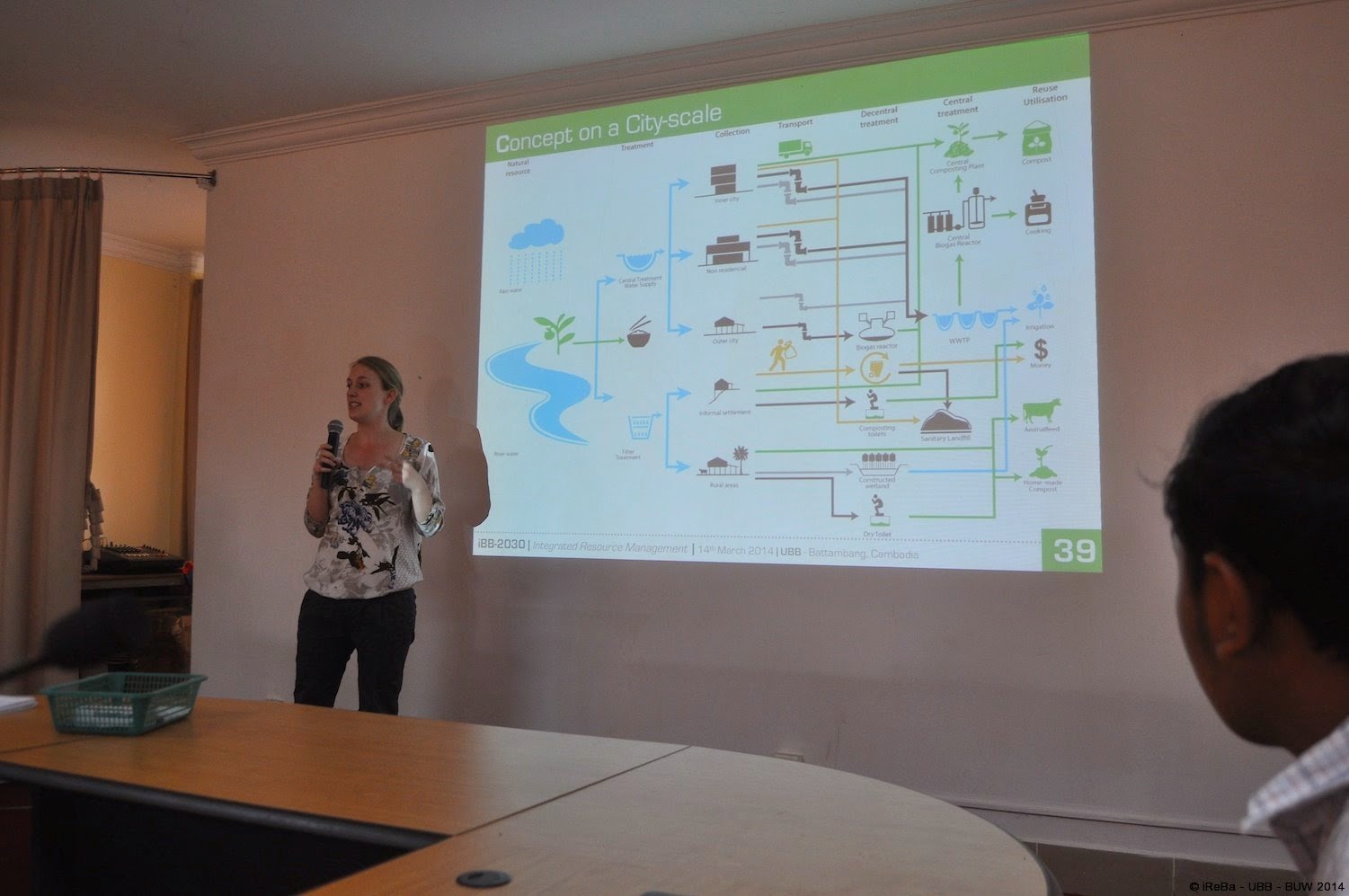 The results of the project are remarkable and an important start for the future cooperation. The work of the students will eventually be handed over to the UBB and the municipality of Battambang, which will be announced in this blog. 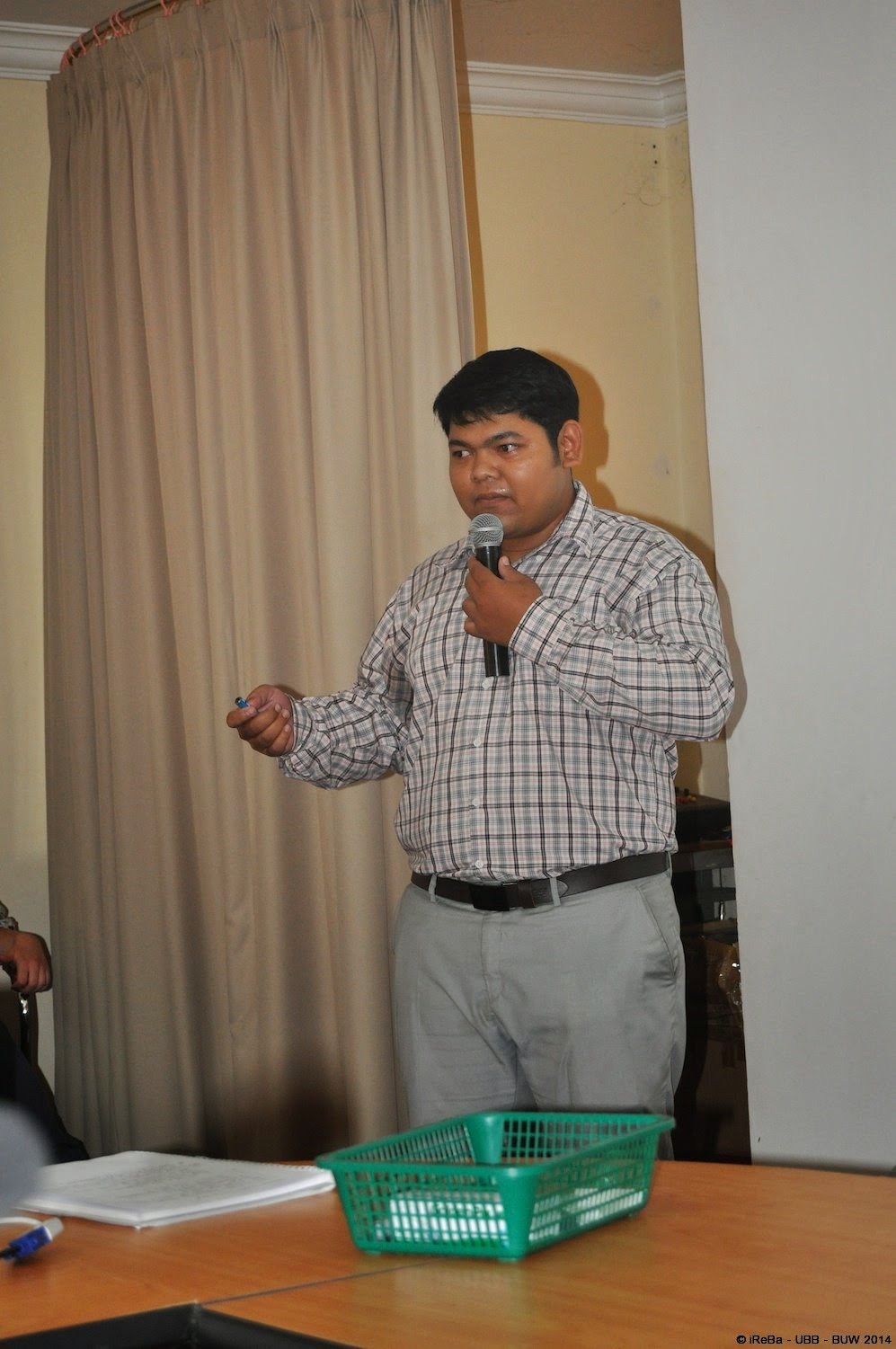 After the presentation, Mr Jürgen Stäudel introduced the vision for development of Battambang in the year 2030 iBB, which describes Battambang as a green and environmental city with high quality of living, which manages it resources diligently. On the panel the representatives of the Municipality of Battmbang, UBB and GIZ were asked to discuss the result of the iReBa project and the vision iBB for Battambang.

All panelists agreed on this vision for Battambang. During the panel discussion it became clear, that a lot of work has already been done to improve the situation in Battambang. However there is still a lot more to be done: institutional capacity building, education, legal framework and in particular the fight against corruption are the most crucial issues, that have been named during the discussion by the panelists. 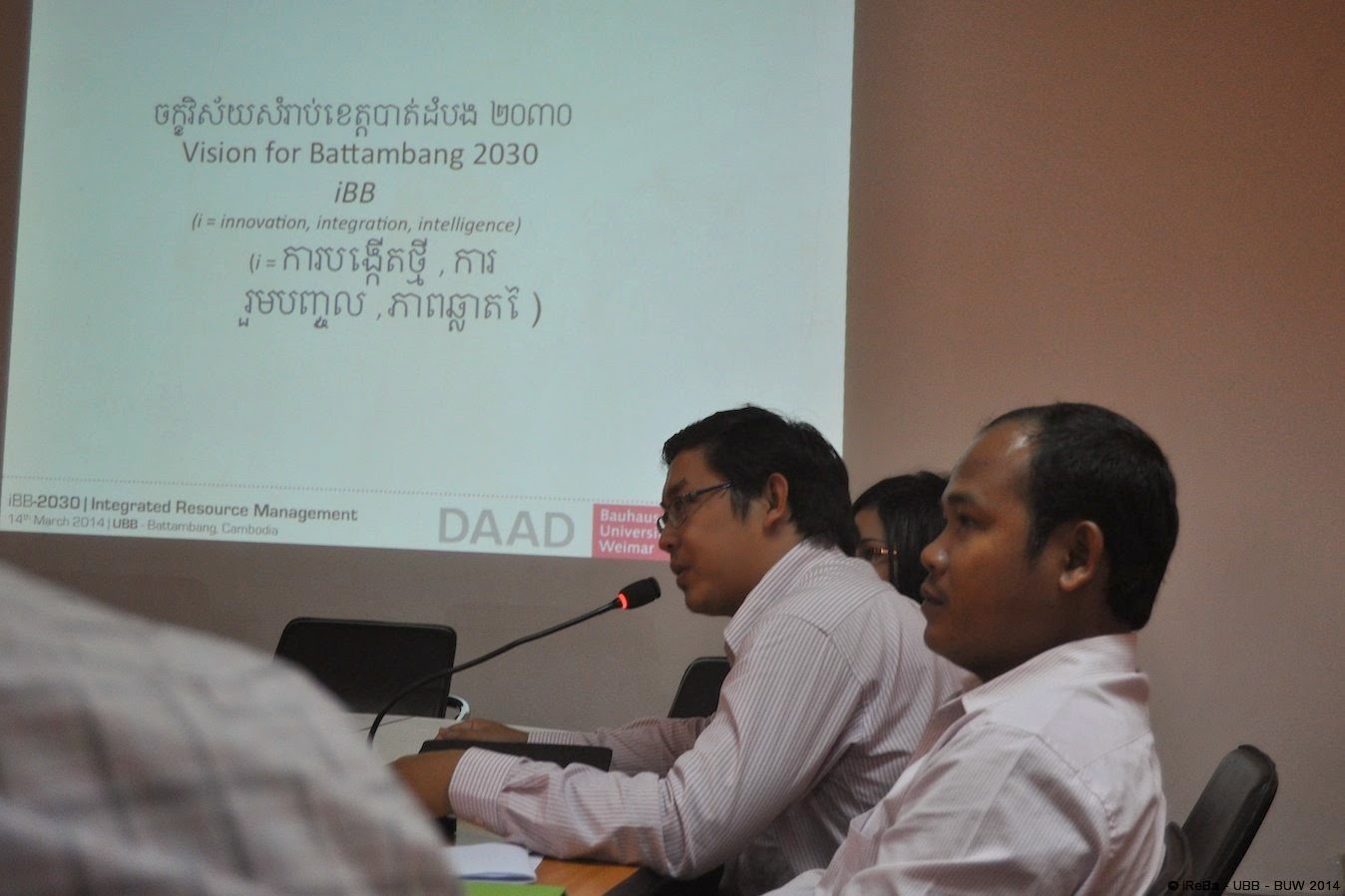 The discussion was very viable and could have certainly be continued for hours. Unfortunately time limited the discussion and there is much more to be explored, developed, said and discussed in future projects... 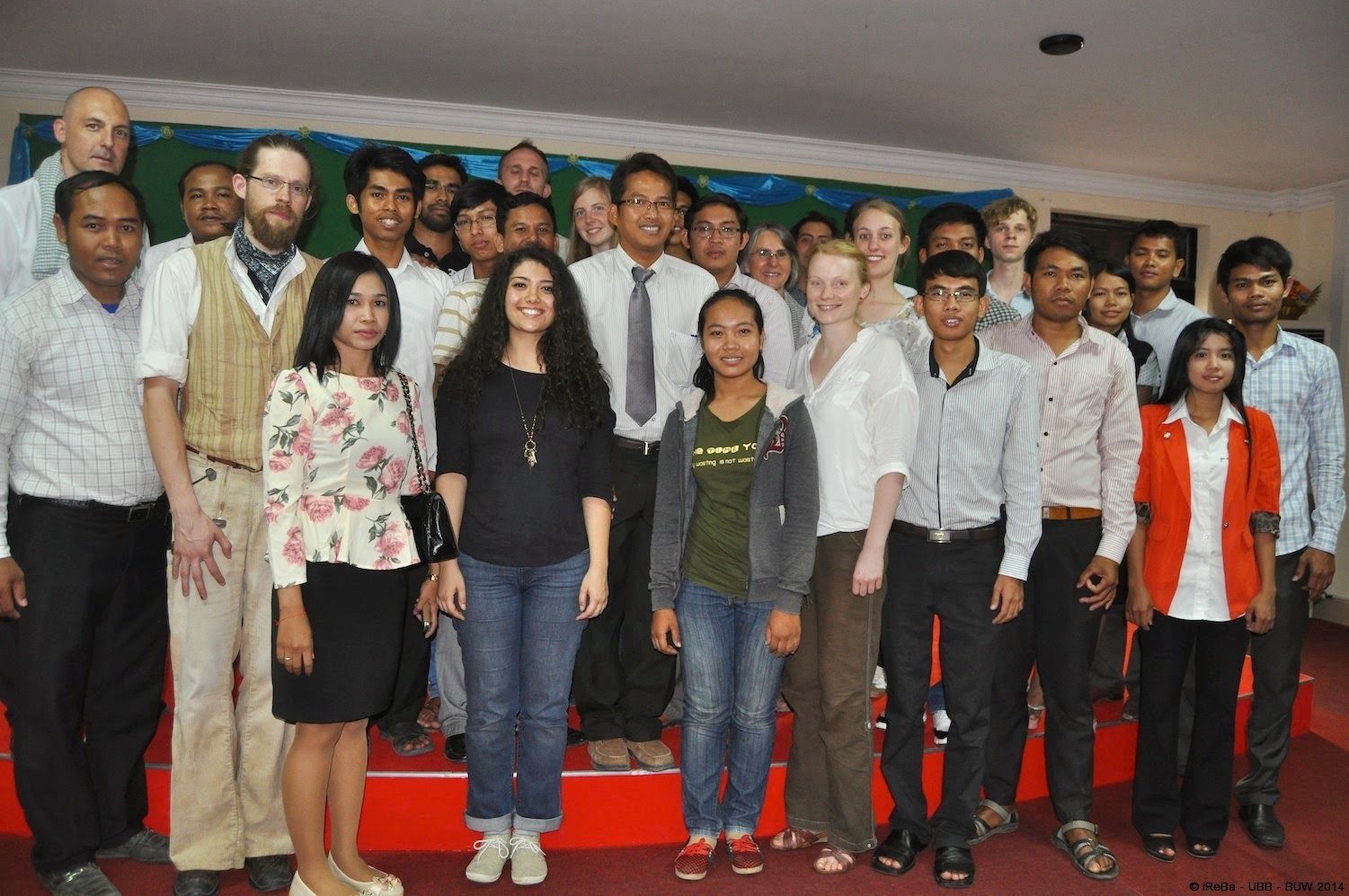 Please click on one of the pictures below to see the iReBa team: 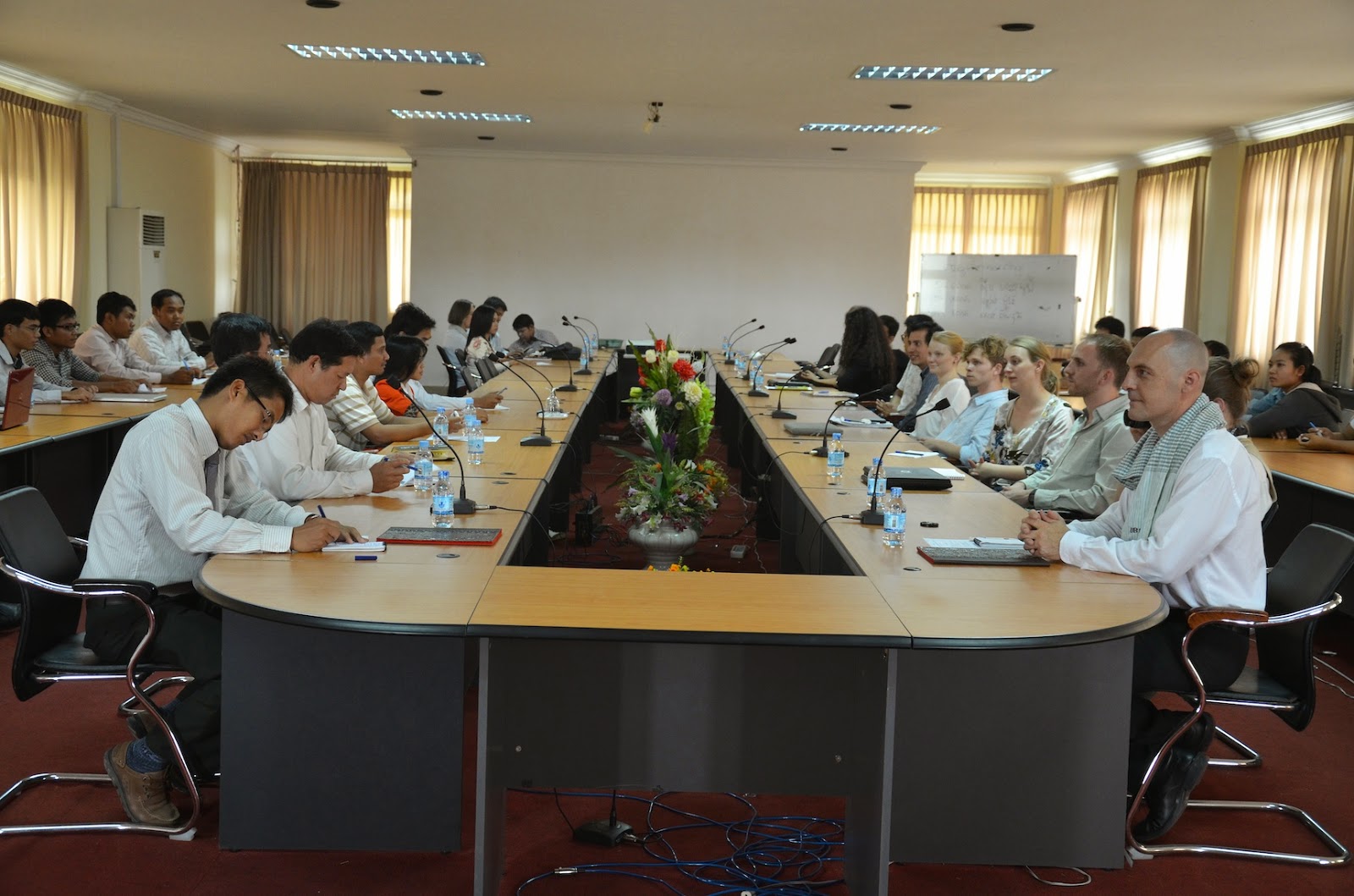 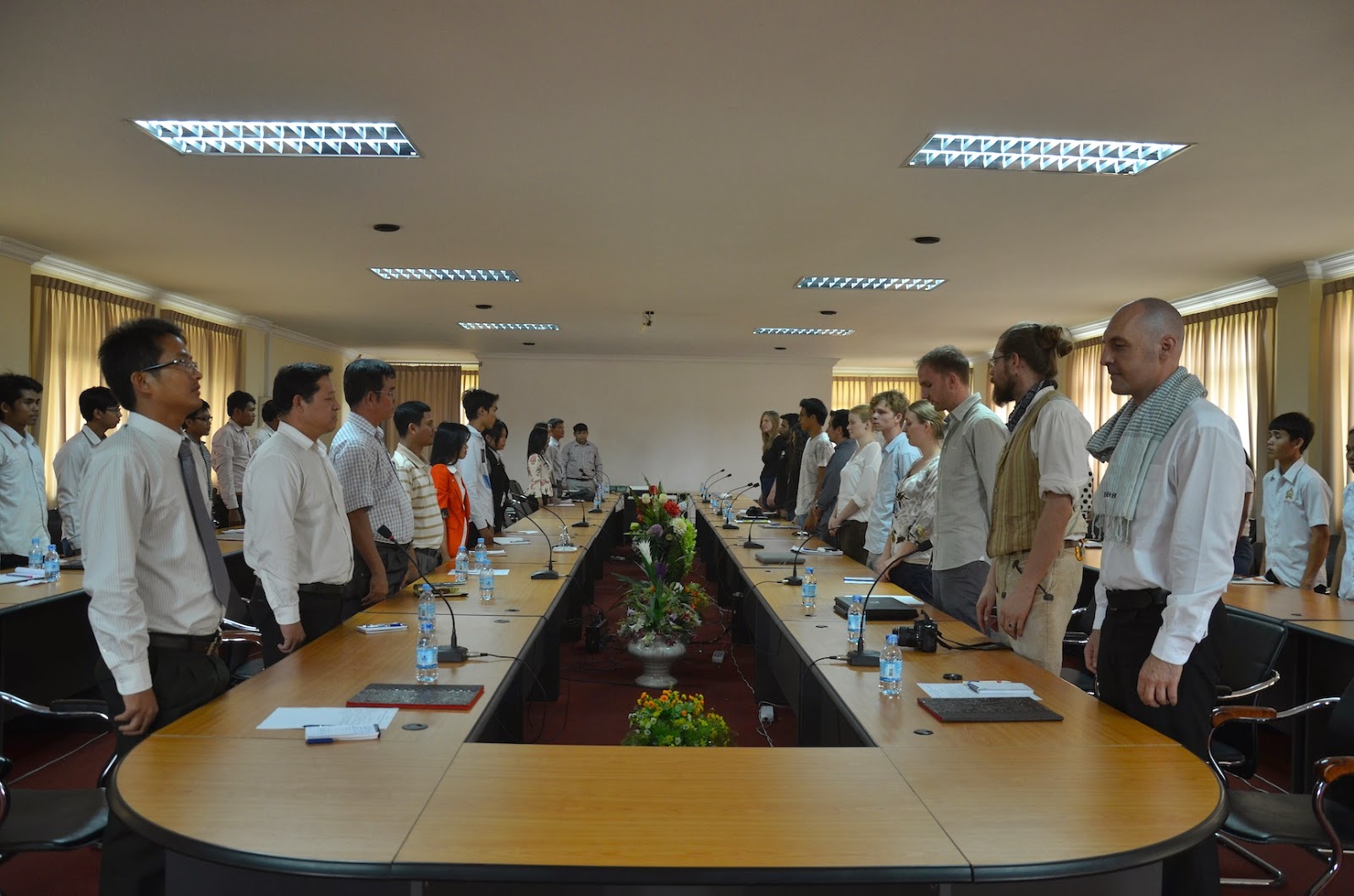 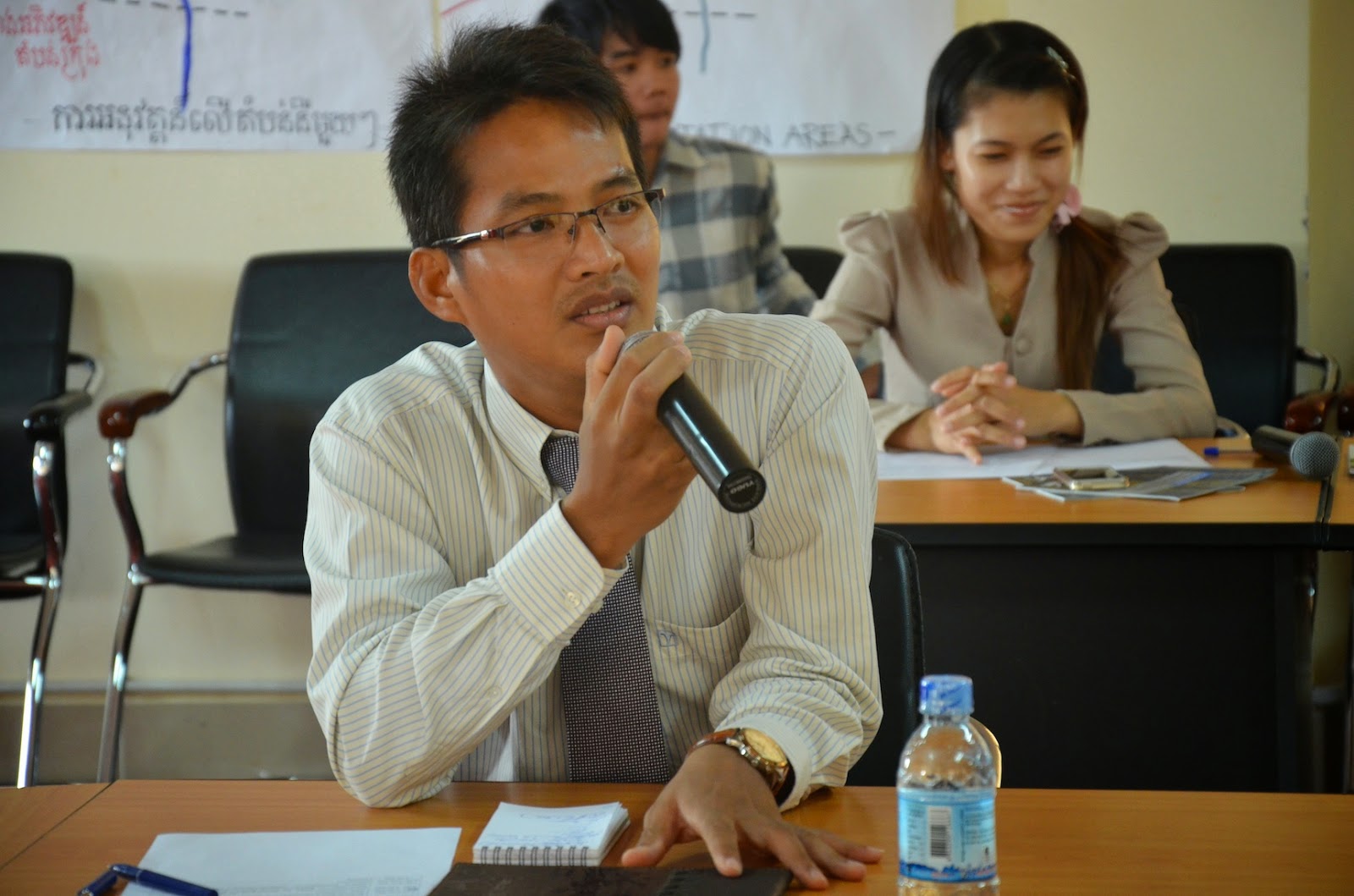 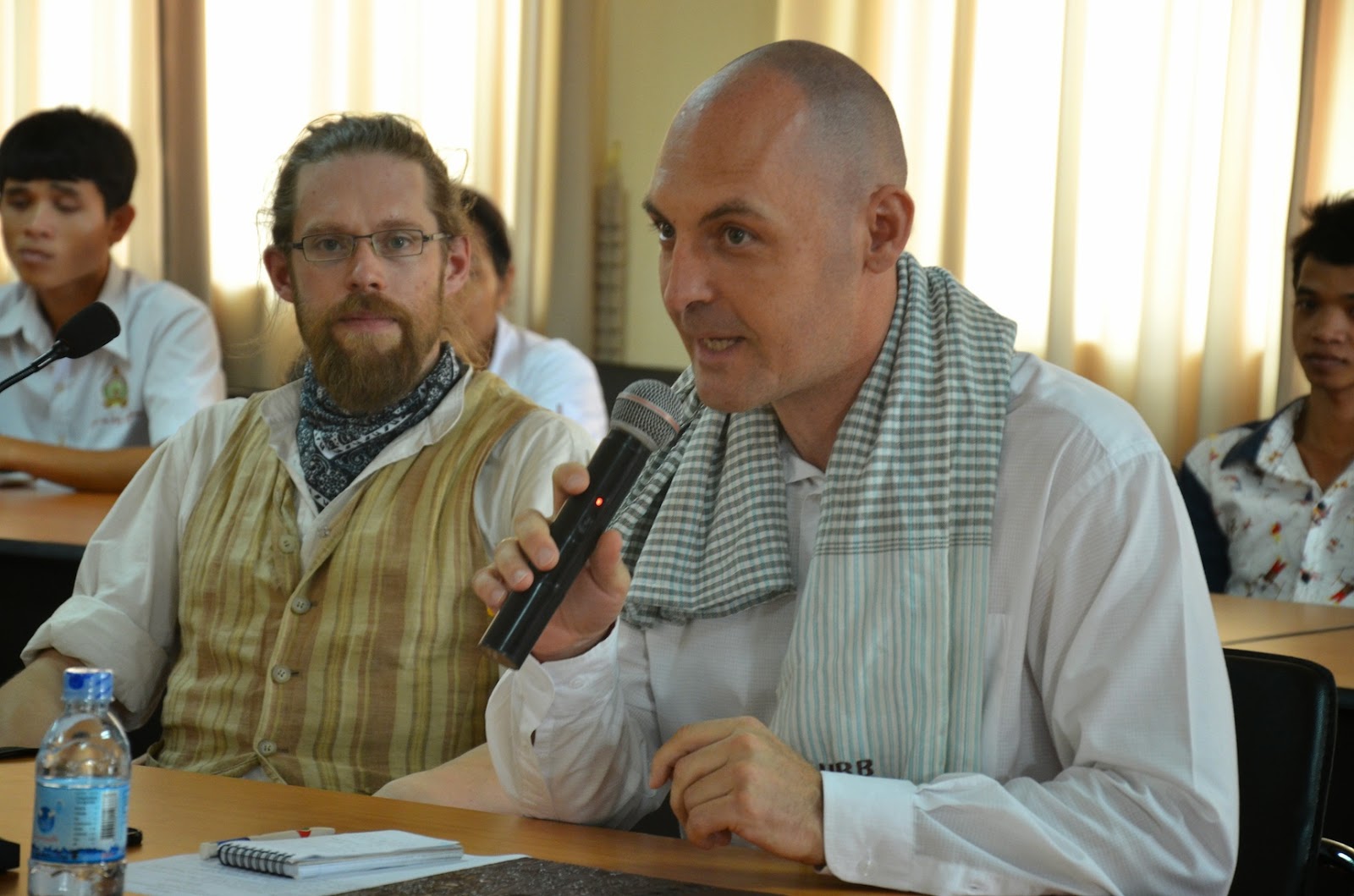 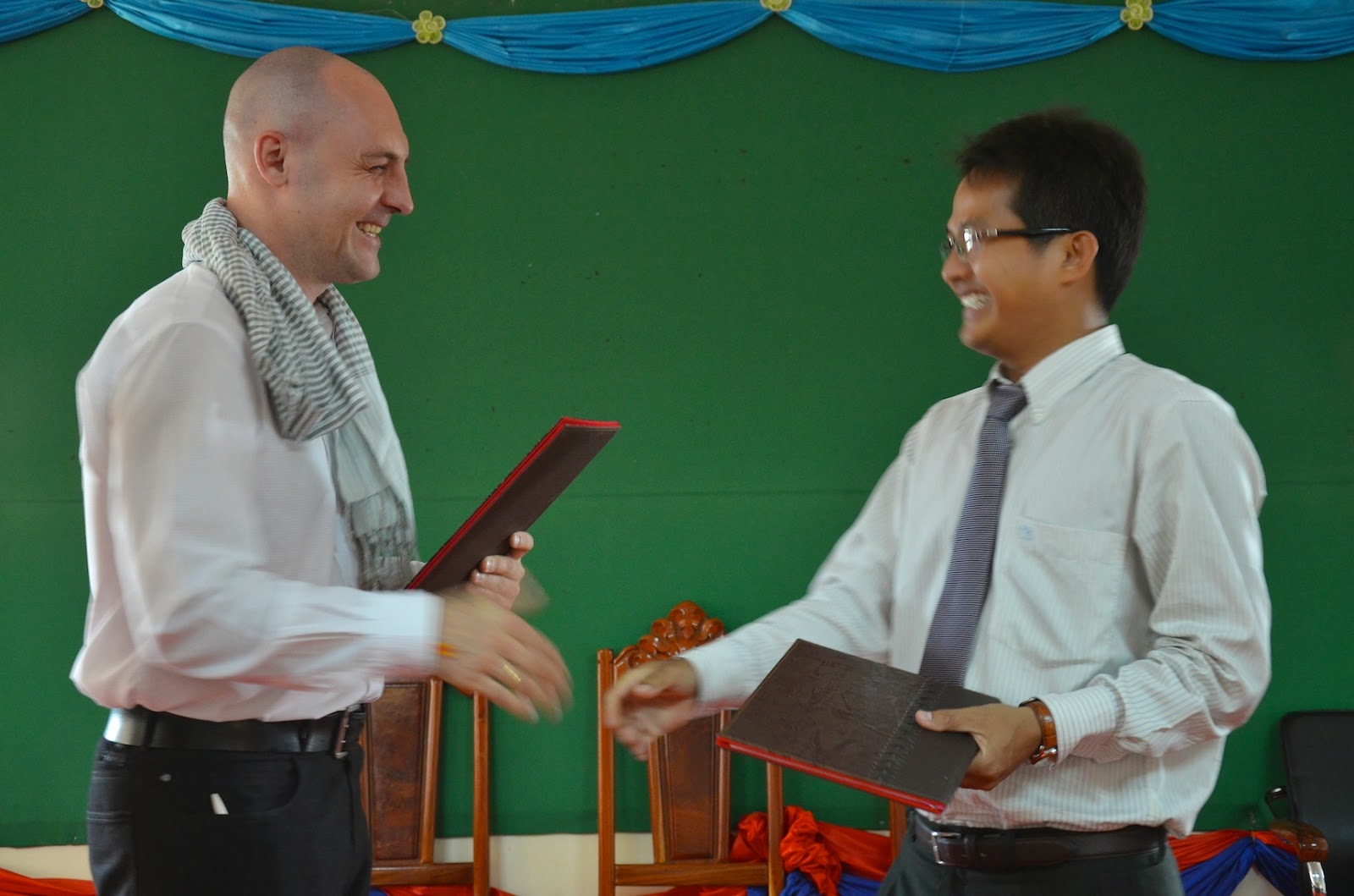 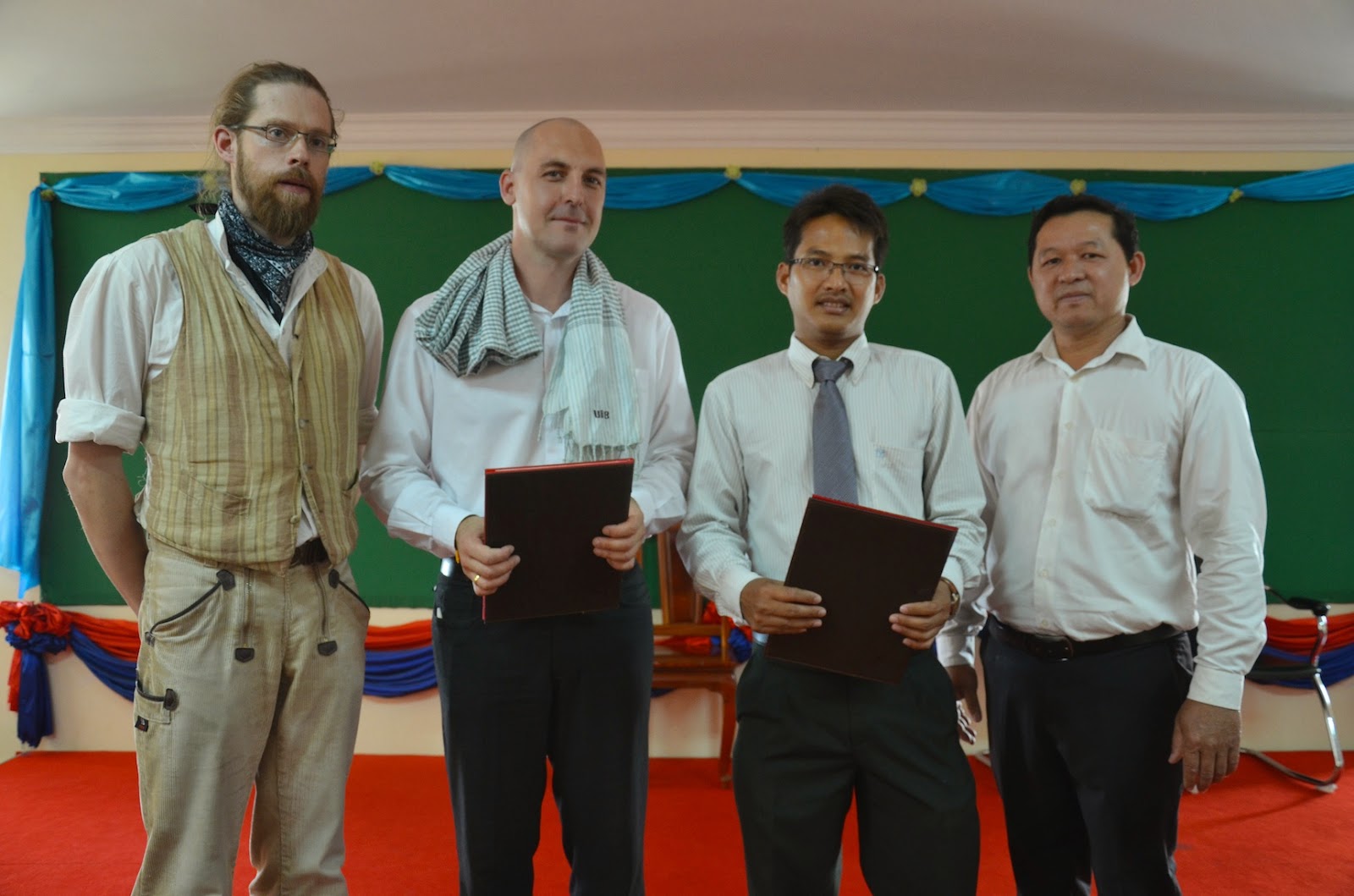 Resources management - We are slowly getting there

After quite some struggle the group is slowly getting there. Can you actually see it?

Not only the waste management in the class room has improved! Can you see it? 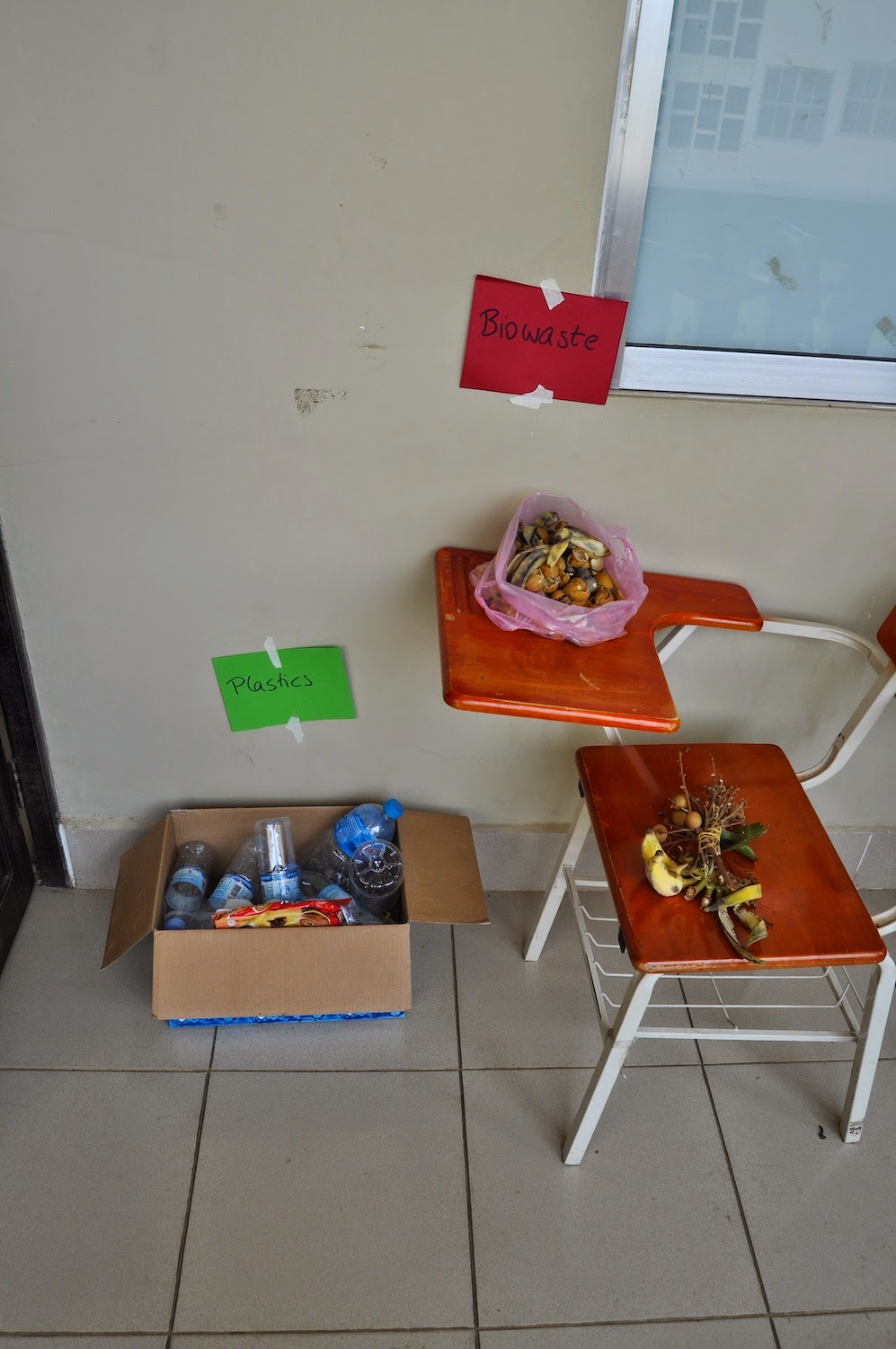 They simplify, they structure, they clarify.... Yes, they are slowly getting there. 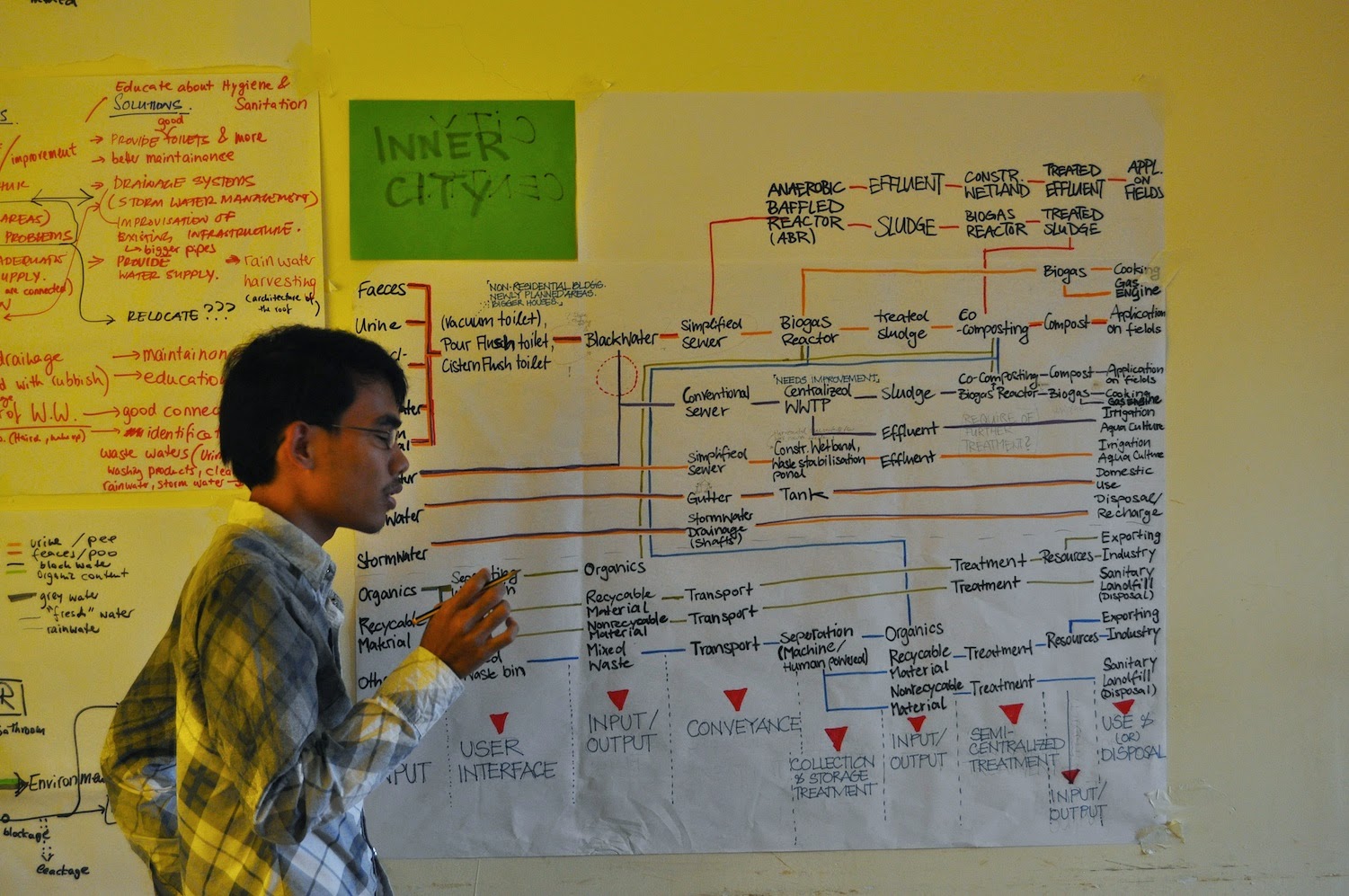 But there is also not much time left. The final presentation needs to be prepared. The results shall be officially be presented to representatives of the University of Battambang, the Municipality of Battambang and other organisations in Battambang.

Still a lot to learn and think about

Thinking intensively about integrated resources management does not immediately lead to obvious results. The waste situation in the class room stands symbolic for the work of the iReBa team. It is clear, something definitely needs to be done to improve, but what is? Where to start? Where is a solution?

All are thinking hard and don't give up. Lets keep it symbolic: All the rubbish is mixed. We know there is a lot of value contained. But what shall we do? How can we make use of all this sh....? Who can We actually change for the better? 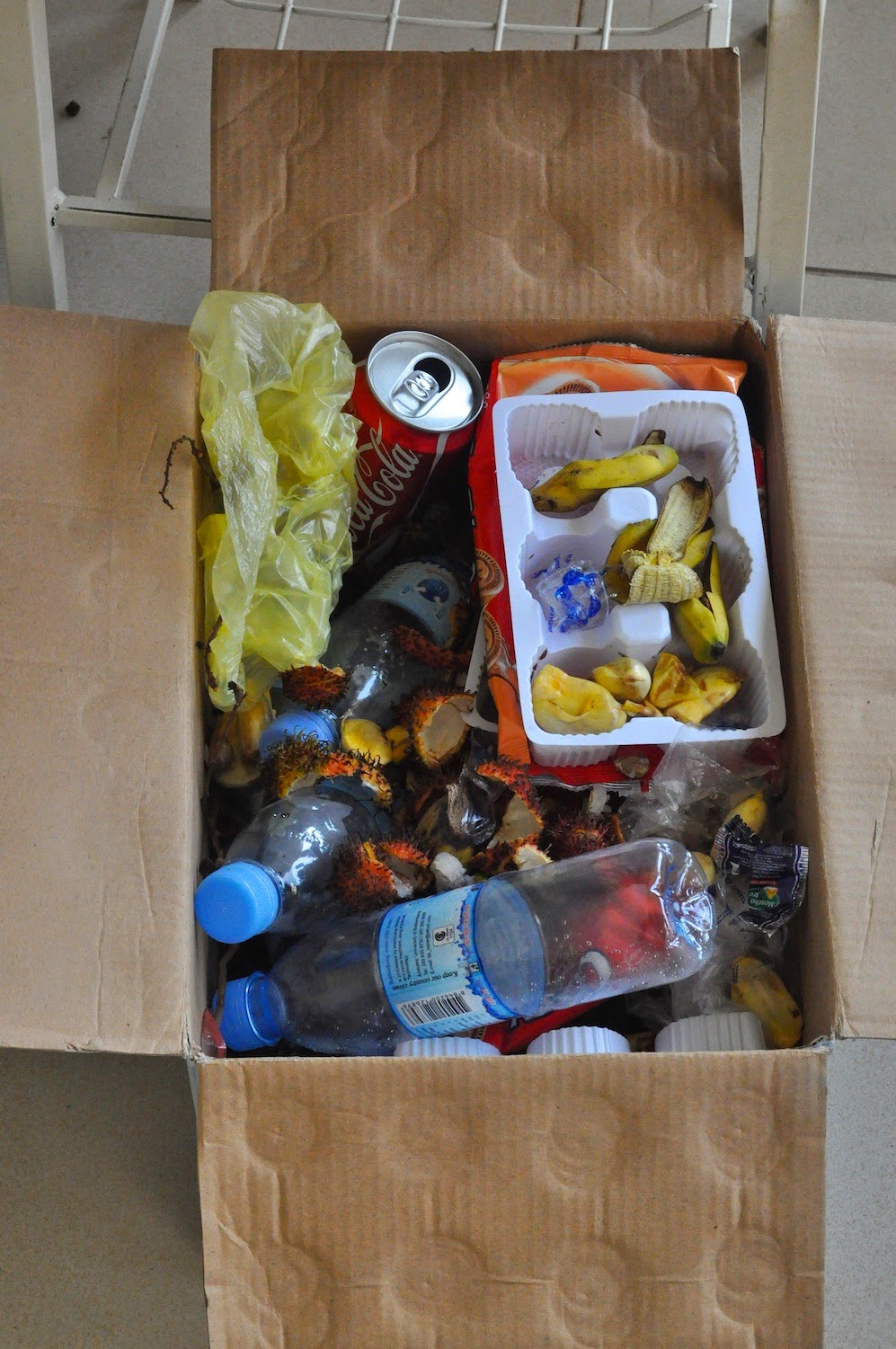 Well lets continue work on ideas and consider different concepts and  technologies for our project.

Smoking heads need relaxation. Everybody is happy to stroll over the market and try to apply what everybody has learned so far and gain further information and data. The owner of the market and his team were very supportive to share experience and data with the students. 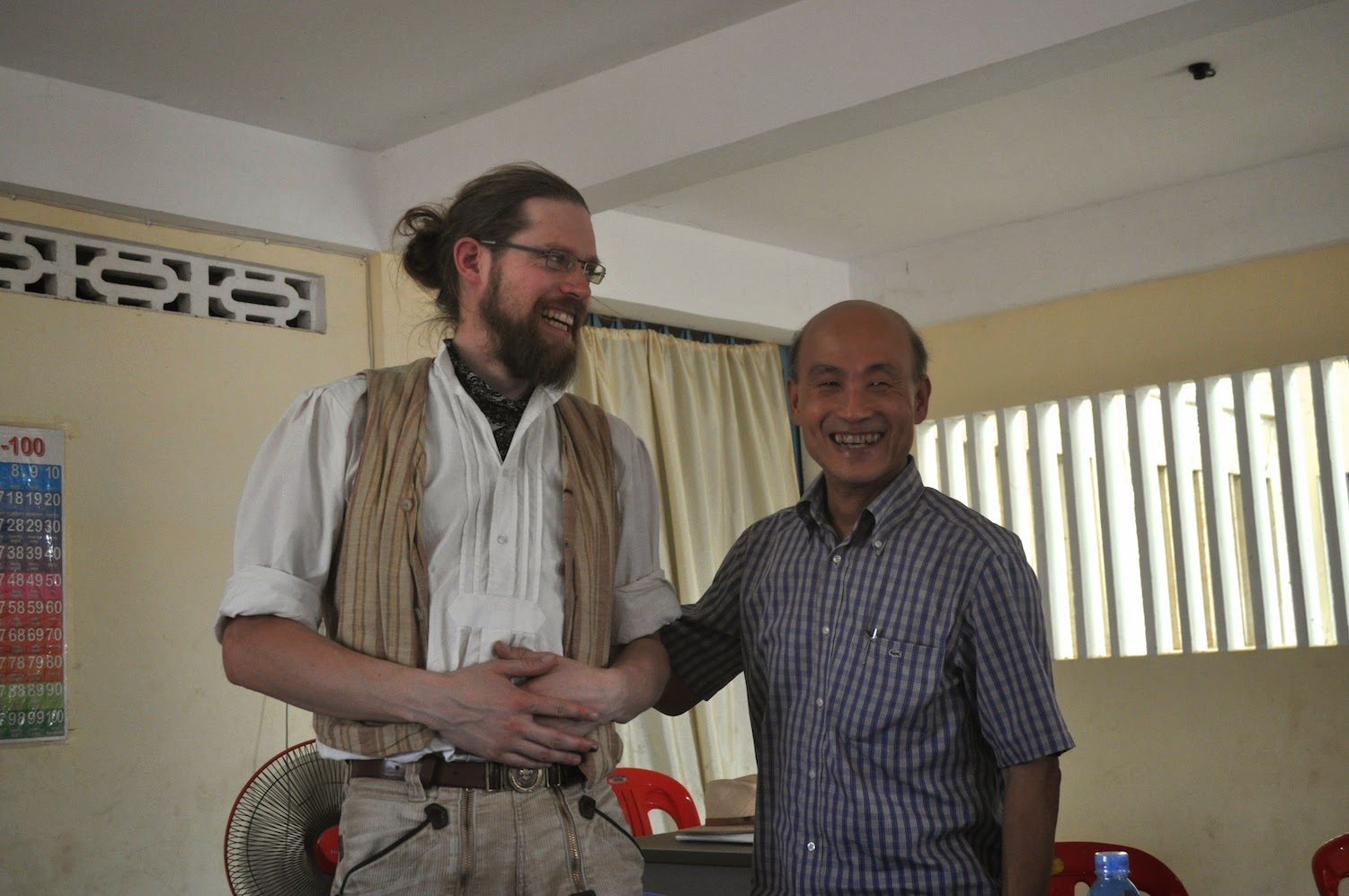 In the evening a well deserved break at the circus Phare Ponleu Selpak.

iReBa - What actually is it about ?

Slowly but surely the heads of the students bing to smoke. The challenges of the topic "integrated resources management" for Battambang, but also the intercultural and interdisciplinary learning experience and collaboration slowly become apparent. 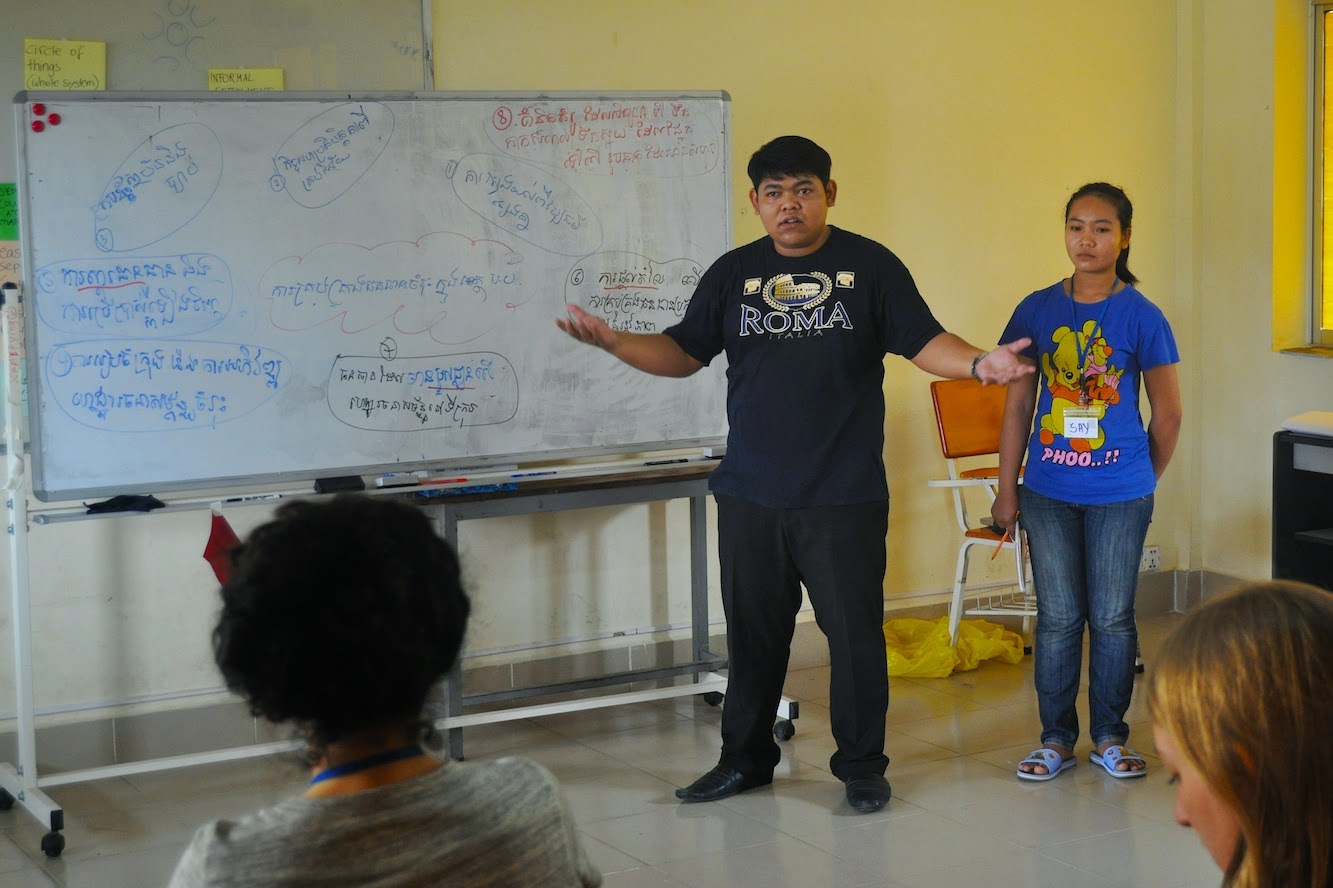 It is all about finde the common language in the group. What an effort?!

But there are no problems, only challenges that we face..... And in the end of the day there was understanding. 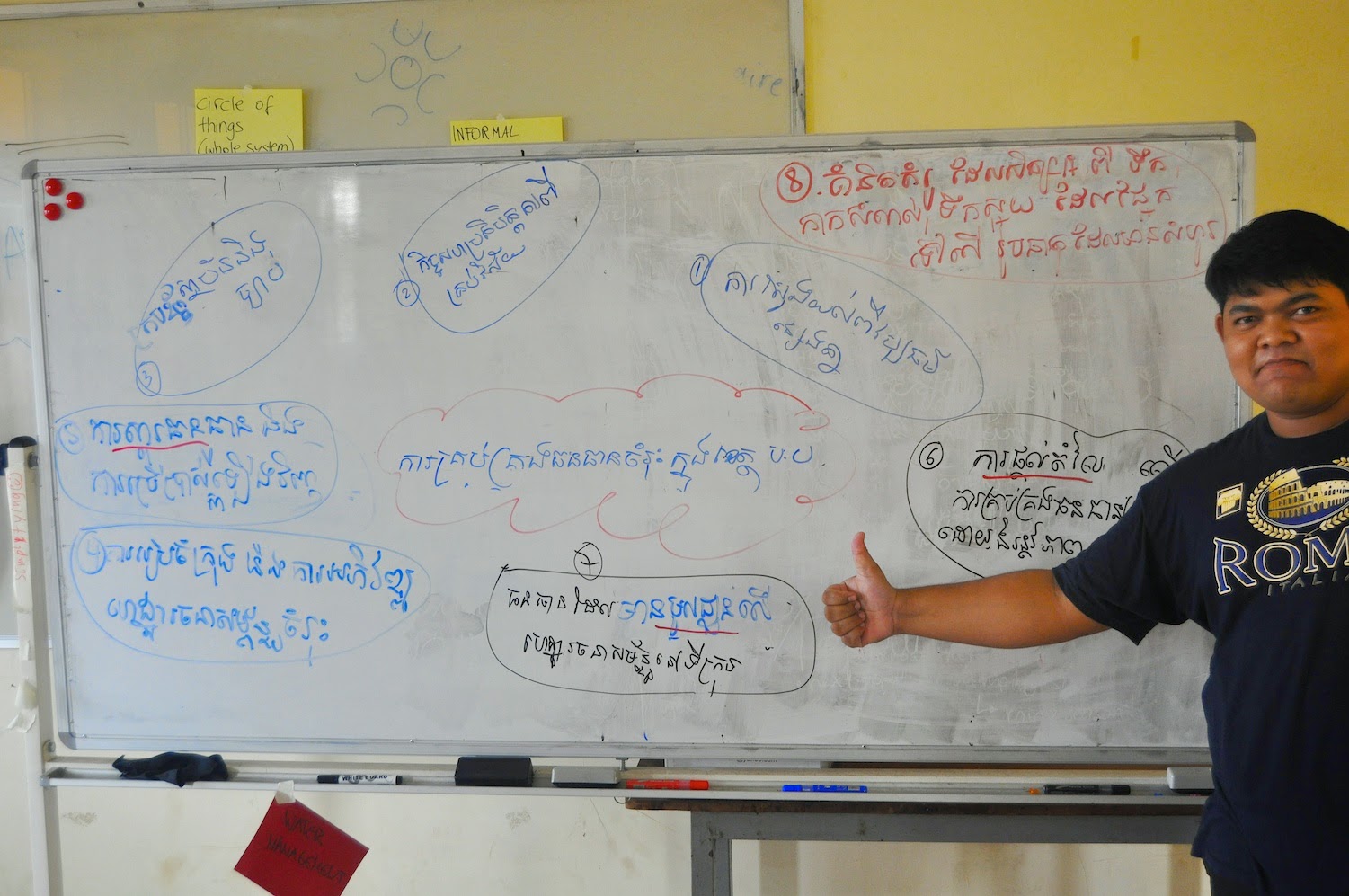 This day an intensive group work started. In a "world cafe" round (world cafe is a method used in group works) the main problems with urban water management and waste management were collected and discussed. 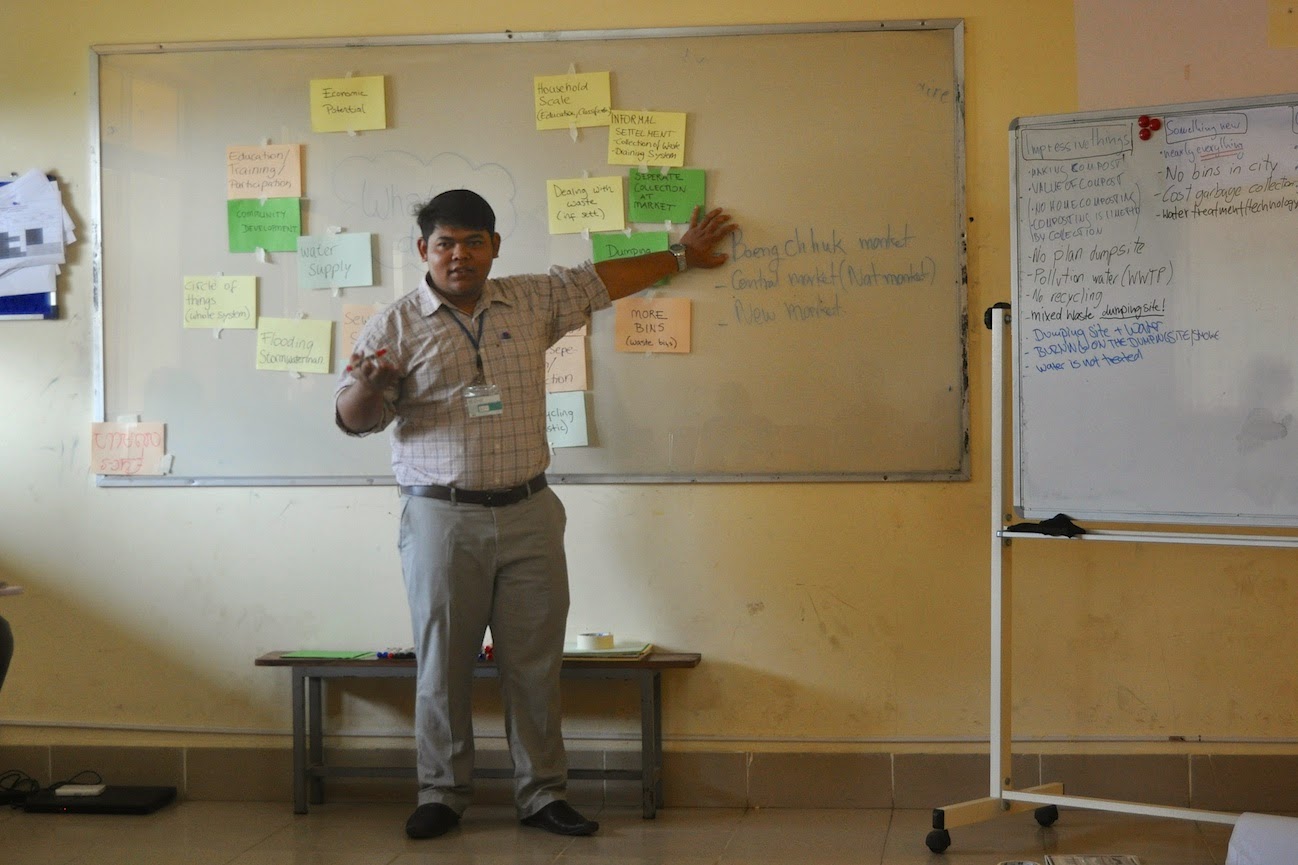 In a first step the students decided to focus on the situation at the local market Psah Boueng Chouk, as it potentially could be exemplary for the city of Battambang. However the whole situation is still very complex and difficult to deal with. 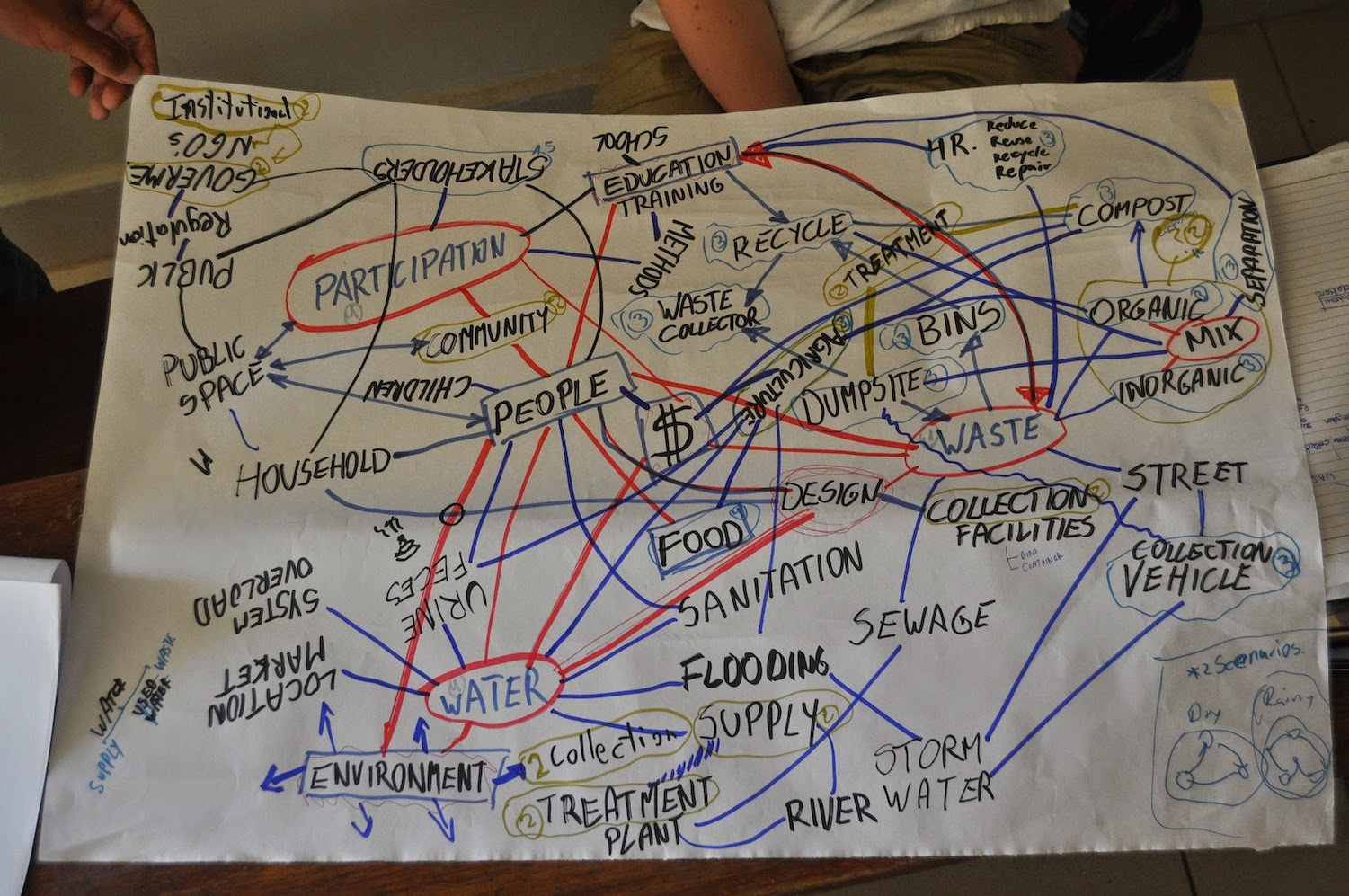 There definitely is the need to simplify.

After the first field trip the student group from Germany had the chance to meet the president of UBB, Mrs Sieng Emtotim. She thanked all the students for coming the long way to Cambodia and sharing their interest and experience with the students form UBB and expressed her best wishes for the iReBa project. "Thank you so much for hosting this project!" 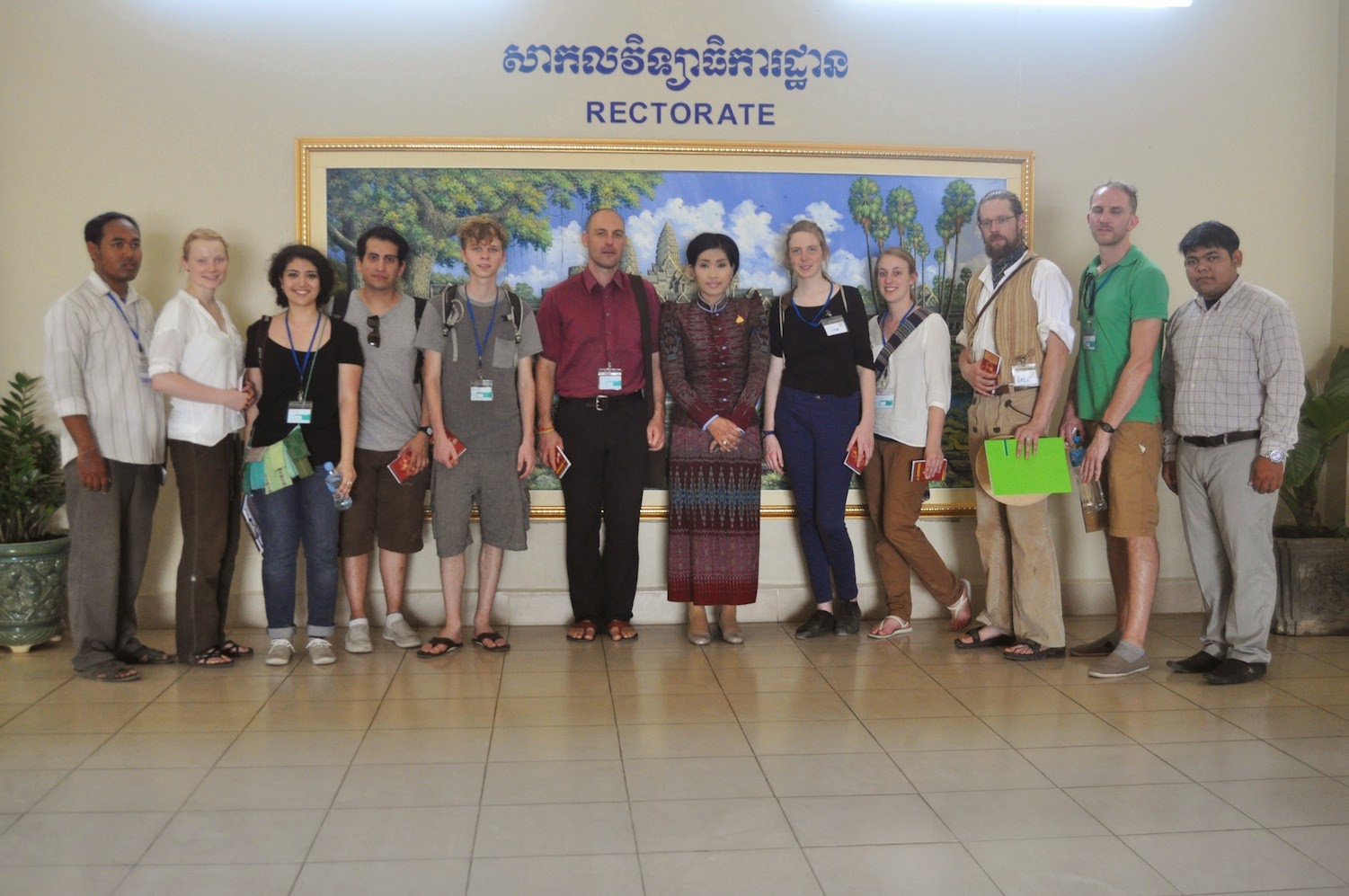 In the afternoon the iReBa team got more valuable input by Mr Imeng from GIZ about the current status of the masterplan for urban development and land-use in Battambang. 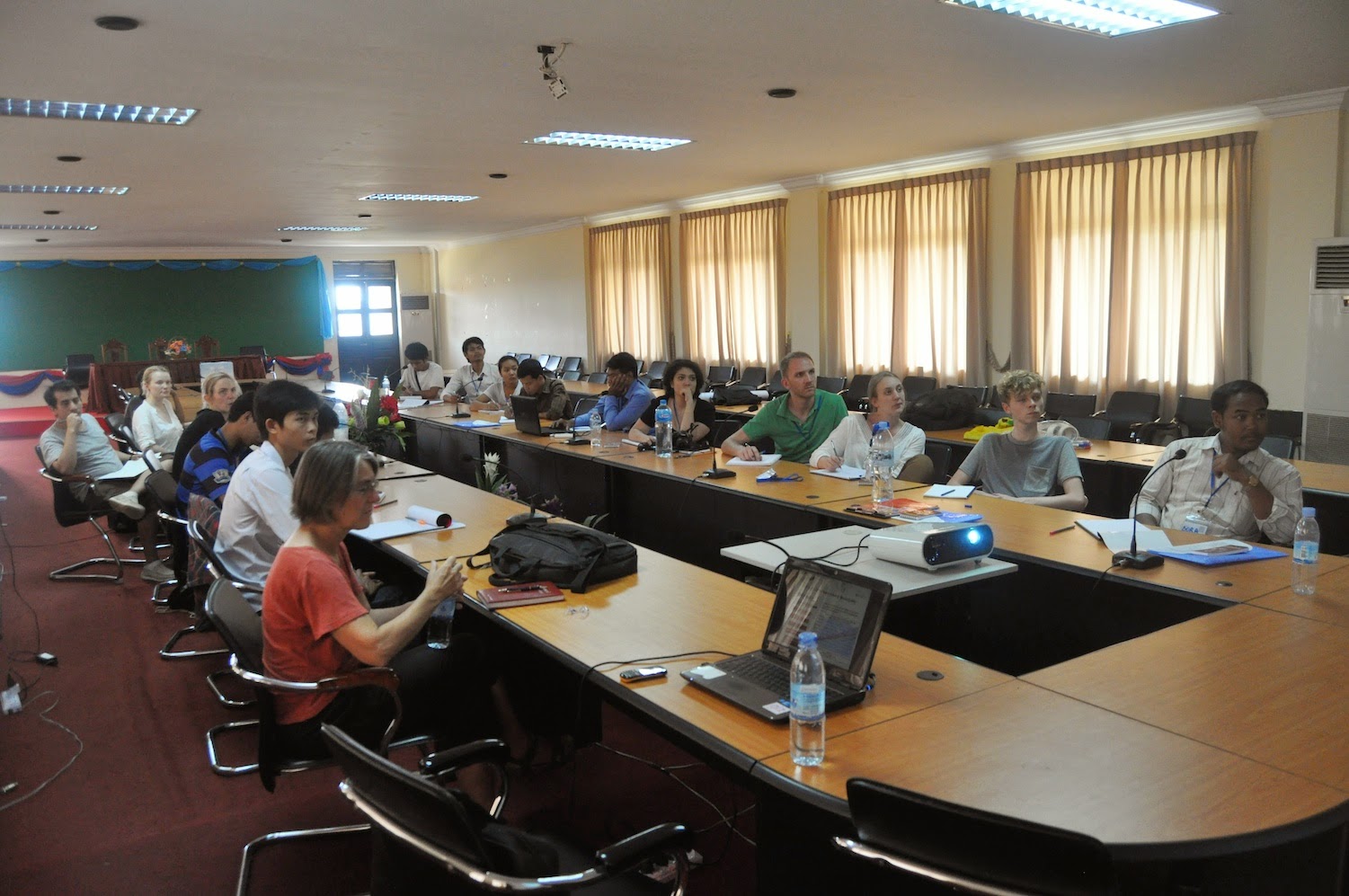 Battambang is the first and only city in Cambodia, which actually has developed a masterplan for urban planning. The masterplan still needs approval by the national government in Phnom Penh, which is due already. It became apparent, that urban planning should include an overall concept for infrastructure development as well. Therefore the iReBa project just comes at the right time to support this important step of development.

The lecture of Mr. Imeng has been very motivating and valuable for the project as it laid out the framework for the future development and pointed out the major local issues in Battambang.

With all this input of the day, the iReBa team was able to identify the main challenges and topics to work on for the next two weeks. More detailed evaluation and data collection has still to fill to many gaps of the whole picture. There is more to come...

A first excursion to the dumpsite, the social waste management centre Battambang (SAB), the wastewater treatment plant and an informal settlement in Battambang helped to create a common understanding of the challenges. The German and Cambodian students have been equally impressed by what they have seen, as almost none of them has been aware of the complexity of environmental problems related to missing basic infrastructure systems or see these problems in reality respectively.

Please click on one of the pictures to enlarge and see the slideshow with impressions from the field trip.

Getting to know each other - Who is who? Now its getting serious. iReBa rocks!

This day the group of Cambodian and German students gets together for the first time. In fact the group of BUW is not "German". There are students from Turkey, India and Ecuador part of the team as well. And there are not only civil engineers and environmental engineers. The group of 20 students hosts students of nuclear engineering, agriculture and urban planning as well.

Now iReBa really gets serious and the group has to proof how to integrate all the different experiences, cultural backgrounds, social and language skills in one big international team. What a nice challenge with a big potential of mutual learning! 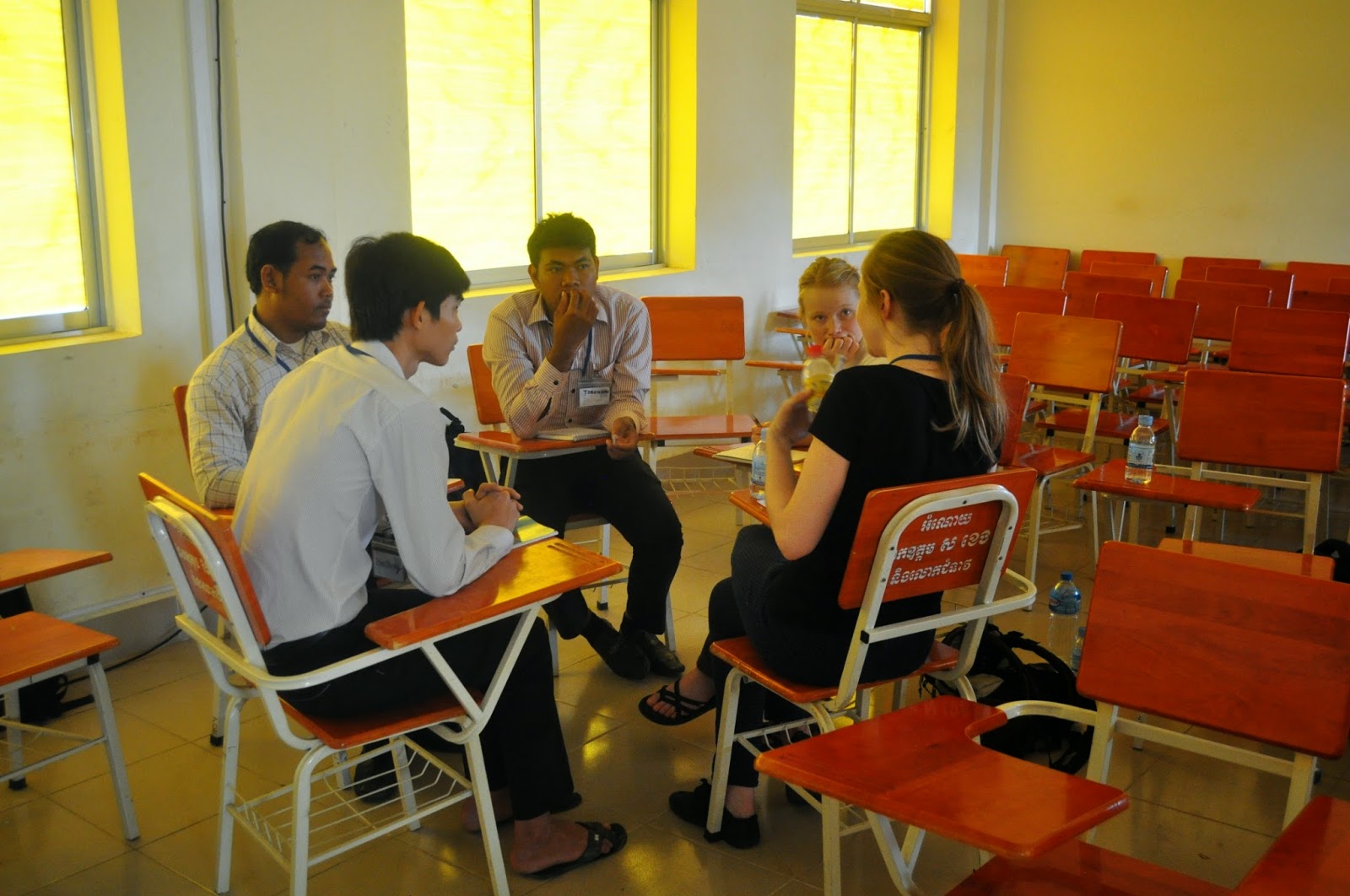 While the Cambodian students use the time to study intensively about the new concept of resources management based on material flows, the student group of BUW has time to explore Battambang and suck up the first impressions of Cambodia.

Today the team of Bauhaus-Universität Weimar (BUW) has been welcomed by the president of the University of Battambang (UBB), Mrs Sieng Emtotim.

In presence of all facilitators of BUW and UBB, as well as the dean and vice-dean of the faculty of science and technology of UBB, Mr. Cheyvuth and Mr Manit respectively, the Cambodian students had the chance to express their expectations about the upcoming two weeks of the common workshops. Although most of the students had a background of nuclear engineering (bachelor), they were happy to participate in this course, which is strongly related to environmental science and engineering. 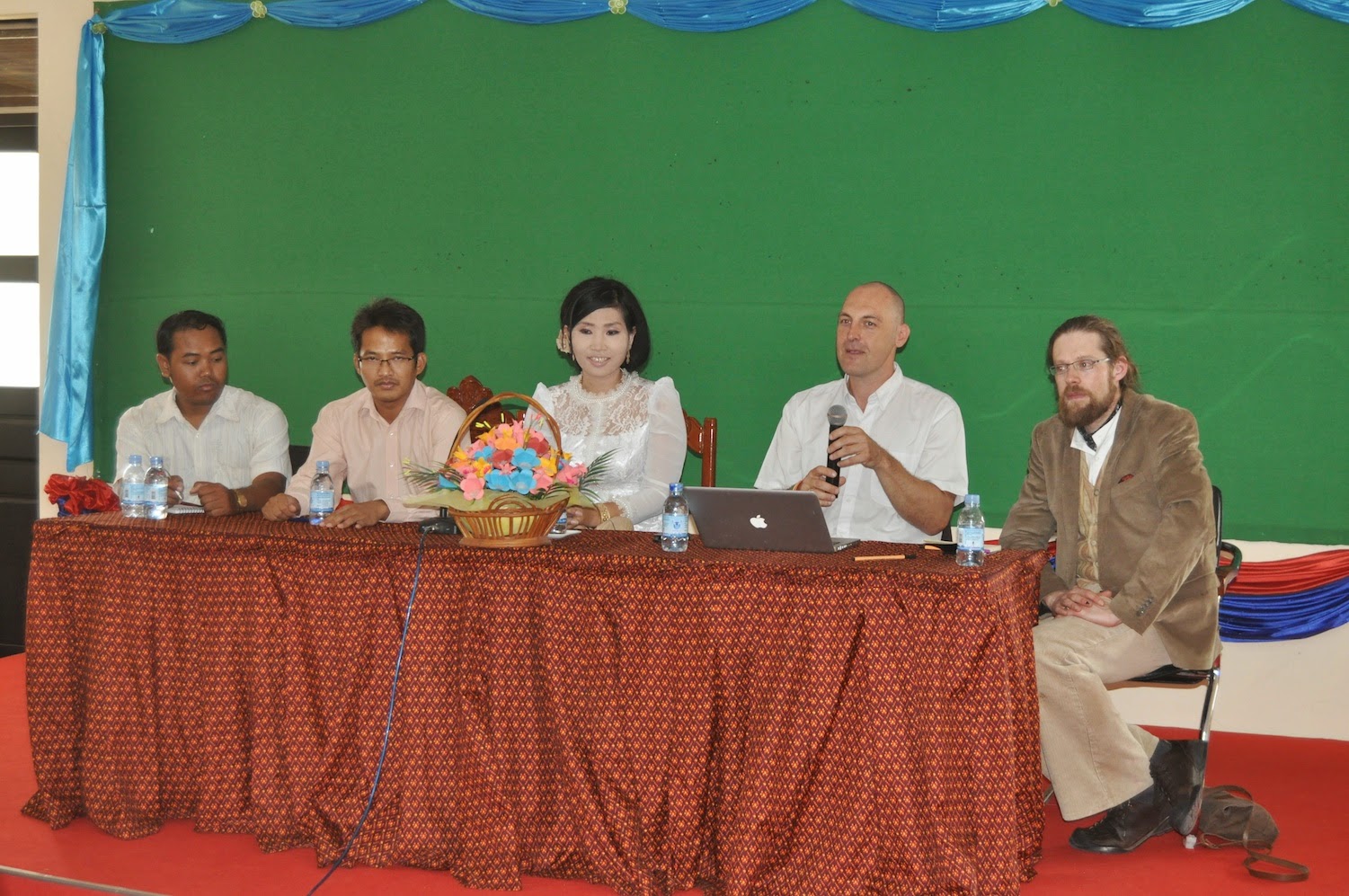 "Adapted environmental engineering is an increasingly important issue for Cambodia". Mr Jürgen Stäudel, the initiator of the project iReBa from BUW expressed his gratitude to UBB to facilitate this course in Battambang and emphasized the mutual learning experience for the students and facilitators of both universities. "Contributing to the fast development in Cambodia with adapted concepts for infrastructure systems is an honor to the BUW and the Bauhaus-Institute for infrastructure Systems (b.is)."

The international student group of BUW has at that time been already on the way to Battambang and arrived late in the evening with the bus from Thailand.